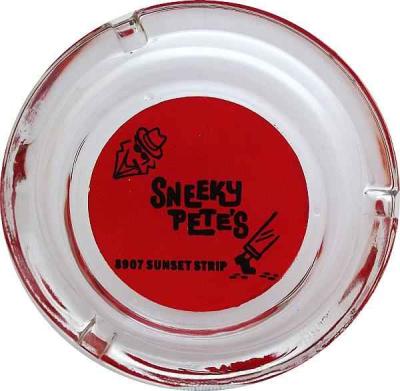 Swingin’ Sixties SNEAKY PETE’S Club on the Sunset Strip Vintage ASHTRAY in Heavy glass w/ black lettering on a cherry red background. Matches the signature red and black awning of SNEAKY PETE’S nightclub, located at 8907 Sunset Blvd. in Los Angeles, California. A cruise down the “Strip” in the 1960’s and you’d pass by Sneaky Pete’s along with its more infamous neighbors that included the Whiskey A Go Go, where Jim Morrison and the Doors were headliners and Ciro’s, which was then home to Frank Sinatra and the Rat Pack. (Photo of SNEAKY PETE’S Club is NOT included.)