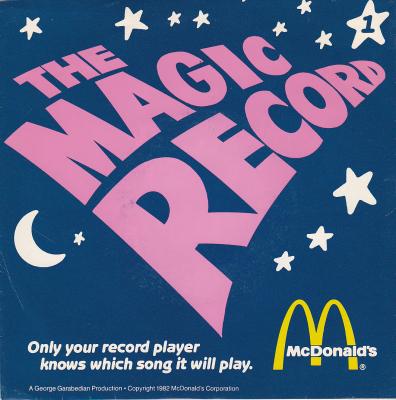 THE MAGIC RECORD, 45 RPM MCDONALD’S ADVERTISING PROMOTION, Produced by George Garabedian for MARK 56 RECORDS. Released in 1982, under catalog #224, this is a 7″ Vinyl 45 RPM. It comes in the picture sleeve shown in the photograph for this listing. The Magic Record is #1 in a series of two advertising promotions which musician-producer George Garabedian created for the hamburger chain. MARK 56 RECORDS specialized in classic radio and television transcriptions and sponsored compilations. THE MAGIC RECORD 45 RPM MCDONALD’S ADVERTISING PROMOTION required listeners to “play the magic record” by placing the record player needle anywhere on the vinyl record. The expectation was that an new and different story would be created every time the needle landed anyplace on the record. It is not clear what specifically McDonald’s intended to promote through sponsoring this 45 RPM record campaign. The vinyl, does however make a lovely advertising collectible.

Condition of both the 45 RPM vinyl record and picture sleeve are Mint, never used, never played.