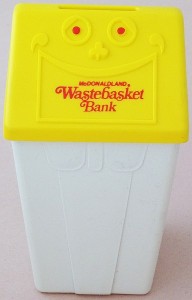 Do you remember the 1970’s television commercial with the McDonald’s jingle, “Don’t Forget to Feed the Wastebasket”?

In the early 1970’s, circa between 1972 and 1975, McDonald’s produced three different promotional wastebasket coin banks to encourage children to learn to two important life skills— to clean up after themselves as well as to save money.

One of the three coin banks was unmarked, while another coin bank was imprinted with “Ronald McDonald.” The third promotional wastebasket was made in 1975 and had “McDonaldLand” imprinted on it, as you can see here on the vintage bank from our store.

In the ad, we see Ronald M., Mayor McCheese and two children eating outside at a McDonald’s restaurant on the patio.

DON’T FORGET TO FEED THE WASTEBASKET

In case you’ve forgotten the lyrics to “Don’t Forget to Feed the Wastebasket,” well, here they are…

“That’s right, we are! And we’d like to ask a favor of you
Would you mind letting us have the paper please when you’re through?

It’s a special little treat when we get to eat the paper–yes indeed!
So if you’ve got a cup or a napkin or bag that you don’t think you’ll need

Don’t forget to feed the wastebaskets, ‘cause they’re hungry, too!